For thousands of years, plantlife has been nourishing animals and humans. These green beings quietly grow around us, largely unnoticed. But plants are a tenacious bunch. So much so that some have evolved to lure, trap, and ultimately kill animals for their nutrients. These are the carnivorous plants that lurk in rainforests, peat bogs and other harsh environments across the globe, adapting to the challenges of their habitats to ensure they thrive.

The sundew may have a delicate name but its nature is far from it. Drosera, to use the scientific terminology, is one of the largest families of carnivorous plants. It contains at least 194 species, native to every continent except Antarctica.

These small, slender peat and bog-dwelling plants boast rosettes of leaves that bear sticky, glandular hairs. While these hairs give them their fragile appearance and pretty name — as the mucus glistens like dewdrops — they also trap insects. Eventually, their prey succumbs to exhaustion or asphyxiation as the mucus envelops them. Death usually occurs within 15 minutes. Sundew plants usually live up to 50 years.

If you only glanced at the pretty blue, purple or white flowers of some butterwort (Pinguicula) varieties, you’d assume butter wouldn’t melt. 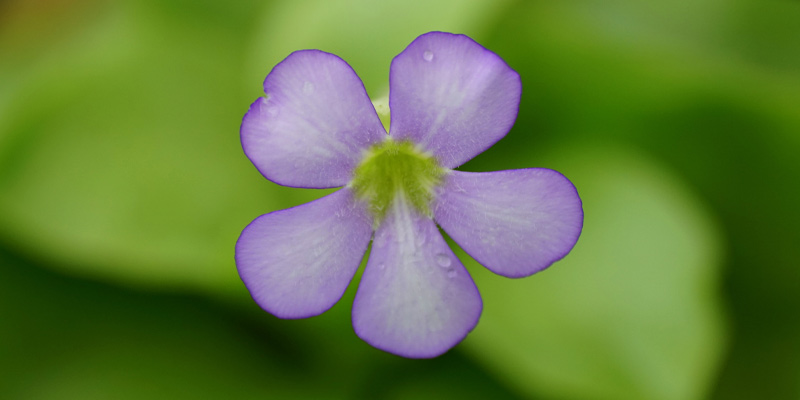 But look a little closer at its bright yellow-green leaves, shaped in pointed triangles. You might notice the greasy leaves excrete a sticky fluid that entices unsuspecting insects into the trap. Once an insect becomes stuck, the leaves slowly curl around the prey as the fluid gets to work breaking down and digesting it for its nutrients. For the natural efficiency of the whole process, butterwort has been likened to Mother Nature’s flypaper.

Botanists thought better of giving a euphemistic name to the Darlingtonia californica. Cobra Lily is what they landed on, and you can see why. Its unique shape is a product of excellent evolutionary progress. 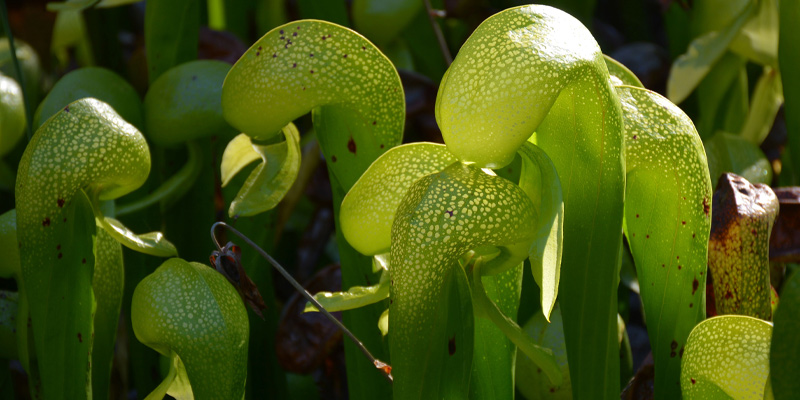 Curling leaves rise from the base of the plant, rooted in the bogs and cold water soils of California and Oregon, and round out into hooded foliage resembling a snake’s head. It is a rarity among carnivorous plants but that doesn’t make it any less ingenious. Flies are attracted to nectar on the forked 'tongue', guiding them into the opening of the hood. Light enters through the translucent, fleshy material, confusing and disorientating the prey, which consequently cannot find the exit. The fly is gently descended to its death by rows of downward-pointing hairs in the trap that secretes fluid to break down the body.

A relative of the Cobra Lily earning its place on this list of carnivorous plants is the Tropical Pitcher plant, sometimes called Monkey Cups. There are many types of pitcher across the globe, including the North American and Australian varieties. Most of them resemble goblets but come in all shapes and sizes – some large enough to trap and digest frogs. Their method of killing comes courtesy of modified leaves, known as pitfall traps, that contain nectar that attracts and then drowns its prey. 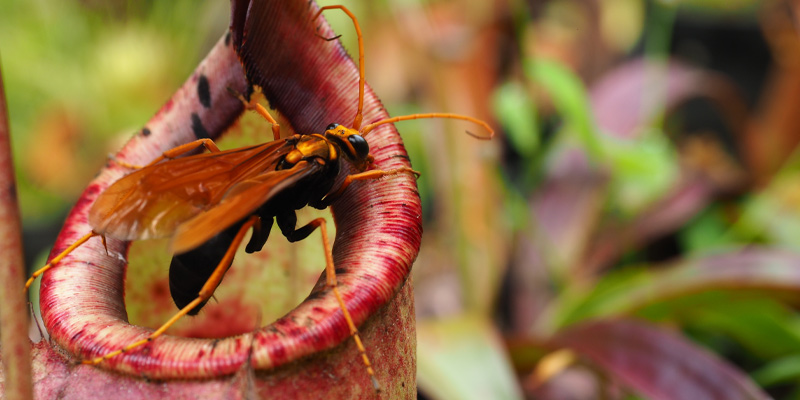 There are two families of pitcher plant: the Nepenthaceae (Old World) and Sarraceniaceae (New World). While the Old World clan that live high in the tree canopy simply fold the end of their leaves to create this deadly chalice, the New World pitchers that stay closer to the ground actually use their whole leaf in deep folds to create a well. The cup-shaped carnivorous plants all concoct a sweet-smelling juice that lures unsuspecting insects that fall while trying to take a sip. Much like other carnivorous plants, the liquid breaks down fleshy insects into delectable nutrients to supplement the lack of environmental nutrients available.

Dionaea muscipula. The Venus Flytrap — popularised in children’s nightmares by The Little Shop of Horrors — is one of the most captivating carnivorous plants. Like most, the plants attract prey using nectar. Once the insect’s attention is caught, the Venus flytrap’s trigger hairs come into play. Should the insect brush one or two in quick succession, an electric charge will snap the trap shut and its interlocking teeth form a cage around the creature. 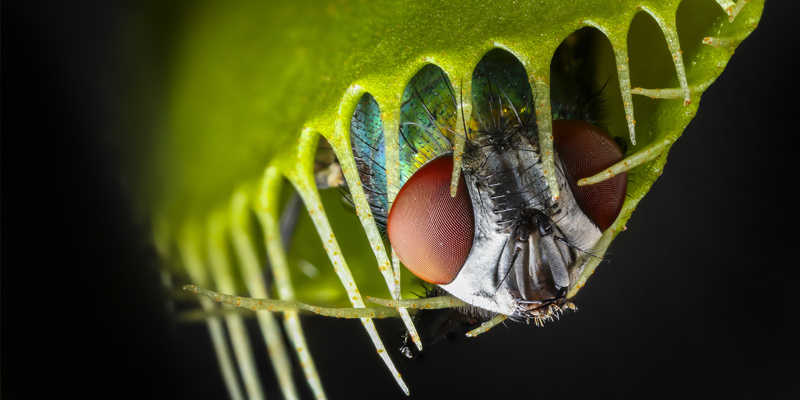 As the insect struggles, the trap will seal and the kind of digestive enzymes utilised by most carnivorous plants will ooze forth and dissolve the insect’s soft tissue. This nutritious matter is reabsorbed by the trap for the plant to feed on for about a week. In a resourceful but shudder-inducing final move, once ready to hunt again, the trap reopens and uses the insect victim’s carcass to attract new visitors.

But there’s also a sadness to the Venus flytrap’s story. The unique species, for all its natural power, is extremely rare. It can flourish only in the coastal bogs of North and South Carolina where habitat destruction has endangered its survival. While it’s a common sight in plant pots on windowsills in the homes of horticulturists and botanists alike, the Venus Flytrap is believed to be extinct in several of its native counties.

Plantlife, far from being the docile, passive presence on this earth many presume it to be, has a rich and vibrant capacity for incredible natural activity and evolution. We may not notice them all the time but that doesn’t mean these incredible green beings aren’t worth protecting.

At the time of publishing, entering the code LEARNING in the checkout will reduce the price of our
Botany Diploma Course to £29.