You might not pay much notice to insects but their secret little lives are likely beyond the realms of your imagination. Indeed, insects are everywhere — a vital part of our ecosystems. Their abundance as relatively easy prey puts targets on their backs as they go about their daily business. They are certainly not at the top of the food chain, but these important critters have developed some fascinating animal mechanisms to survive, and thrive, in the big, wide world.

Some insects utilise crypsis; forms of camouflage and environmental mimicry. While some forms of crypsis will be familiar to you — such as a butterfly’s wings blending into surrounding flowers — others are much more uncommon.

Take the Javanese Leaf insect. Native to tropical Asia as well as Madagascar, Mauritius and the Seychelles, these flora-dwelling insects have a plethora of predators to avoid. Luckily, oak and guava leaves provide them with nourishment as well as the opportunity for masquerade or mimesis. 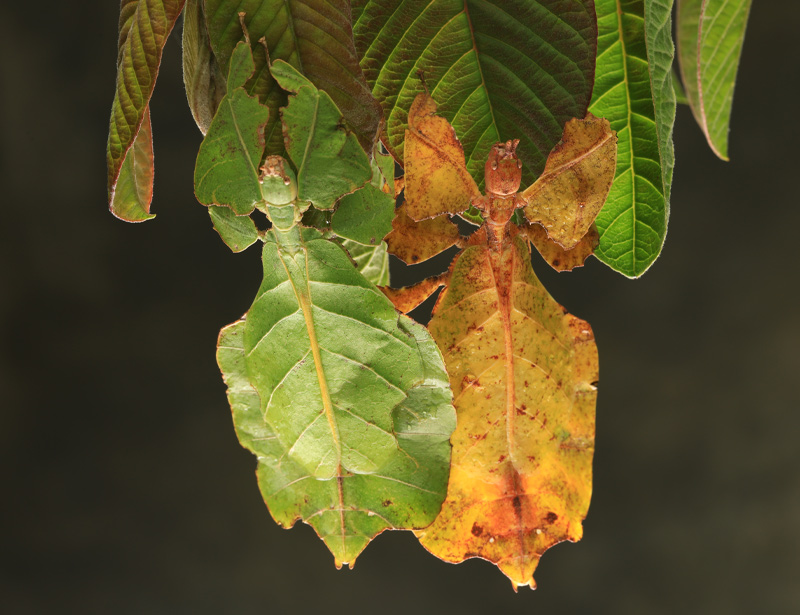 These insects boast the green, yellow and orange shades that colour the foliage, right down to the jagged and browned edges of the leaves. The elaborate markings can even develop to look just like leaf vein patterns and even spots of disease or damage, including holes. Sometimes called walking leaves, they are so convincing in their mirroring of other objects that they even sway in the breeze just like the green matter they mimic.

This type of camouflage essentially allows the insects to act like an object in the surrounding area that is of little interest to their prey. Often, the predator will just carry on by. These walking leaf insects are related to, the more common, stick insects, which use similar adaptive measures to blend into their environment. Fascinatingly, stick insects have also been known to shed appendages to escape predators.

But these deceits don’t always work. Some predators, such as the blue jay, have developed an awareness of insect crypsis. So, our little critters have secondary lines of defence. For example, beetles and weevils will sometimes engage in thanatosis — in other words, they’ll play dead. It’s not the most glamorous or gallant form of defence but it is effective in the face of danger.

Insects That Strike a Pose

There is a dramatic alternative to this — those who take up impressive stances against their predators. Threat-like postures are more commonly displayed in predatory insects, such as the praying mantis. But they can be effective for prey too and are particularly powerful when combined with other forms of defence, as we shall now move on to.

Insects That Startle Their Prey

For something a little more subtle, entomologists can turn to insect markings that are designed to startle, distract or even scare predators away. This is in stark contrast to the insect crypsis tactics we’ve seen among those that look like leaves.

Flying creatures practising insect crypsis can sometimes take momentary flight, revealing brightly coloured marking underneath their camouflaged outer layers. They’ll immediately return to their state of crypsis in the hopes their prey will have lost them in the flash of colour. Similarly, forewings can be opened up to reveal eye-like markings designed to startle predators. 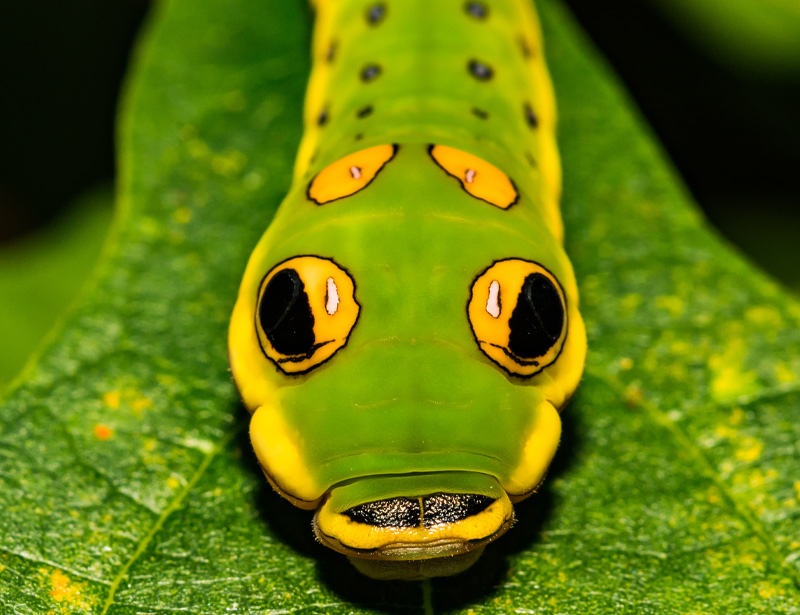 Most impressive and unusual, however, are the insects whose markings are designed to consistently look like their predator’s predator. Take a look at the snake-like markings on this Swallowtail butterfly caterpillar, for example.

Insects That Have Mechanical Defences

Some insects have defences built into their bodies. For example, some caterpillars are covered in tiny hairs that deter predators who find the sensation of coming into contact with them unpleasant. 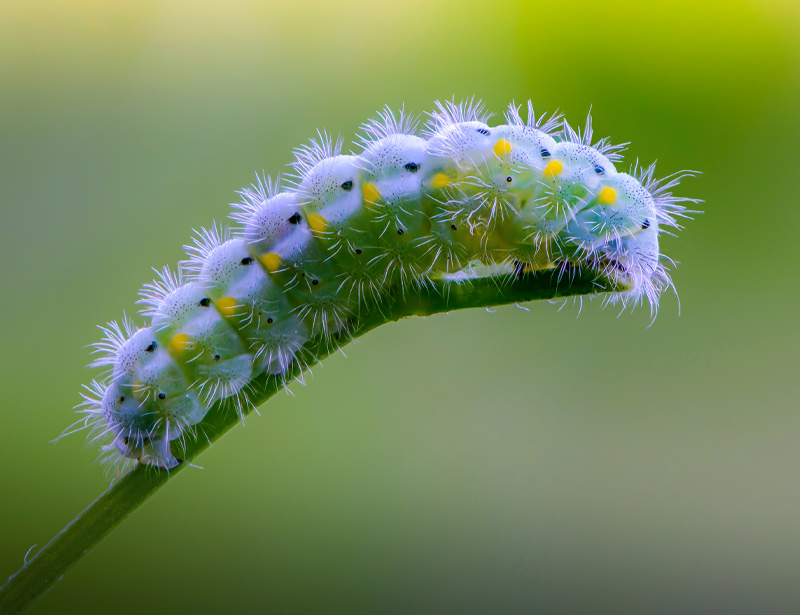 Any kind of bristle, hair, horn, mandible or spine is considered to be a mechanical insect defensive tactic. You might not think a few hairs sound impressive enough to detract predators, but they can be the ejection site of noxious chemicals, as is the case with some Lepidoptera, or moths and butterflies.

Insects That Have Chemical Defences

This brings us neatly to the chemical defences of insects, which can be split into two classes. Class one are considered noxious and harmful chemicals expelled from insects in danger, while class two chemicals are not harmful, as much as they are unpleasant to predators. The latter is more likely to be used to alert fellow prey to the danger, but are more volatile, reactive and less effective in nature. These defences require much more energy to engage than crypsis and so are often better observed in groups. 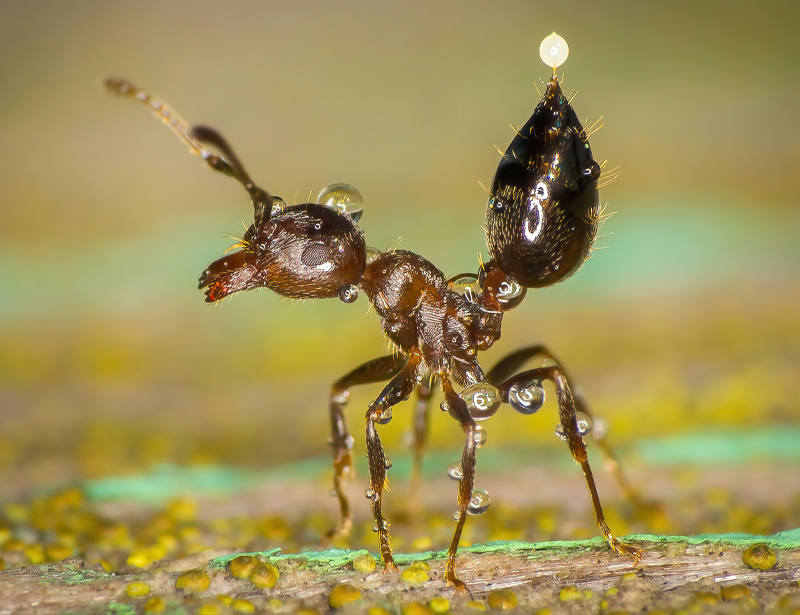 Many ant, bee and wasp species defend their nests and hives through a system of swarming, with soldier ranks taking up a protective position, while the workers remain inside the nests.

These kinds of defences are perhaps why some insects — Queen termites, for example — can live for up to 15 years. Yet, for most, the big, wide world is a short-lived and tough environment. Many live just a few days, despite their incredible defence mechanisms.

At the time of publishing, entering the code LEARNING in the checkout will reduce the price of our
Entomology Diploma Course to £29.