Skin Anatomy: An Examination of the Body's Largest Organ

Your body is an incredible thing; a system of approximately 10 trillion cells divided into structures and mechanisms that make you, you. Your heart will beat about 2.5 million times in your lifetime and your blood will travel about 1000 miles in just one day. But perhaps there is nothing more incredible in your body than your skin anatomy — the very thing that keeps us together and stops us from floating over the edges.

But it doesn’t just hold things in. Your skin anatomy also keeps things out. It is the first line of defence against harmful pathogens, ultraviolet radiation and many other environmental threats such as heat, cold, and pollutants.

Your skin is part of the Integumentary System – one of the eleven organ systems that make up your body’s physiology. This system’s primary purpose is to protect; in doing so, its parts — the skin, hair, nails, glands, and nerves — act as a physical barrier between the external environment and your internal organs. 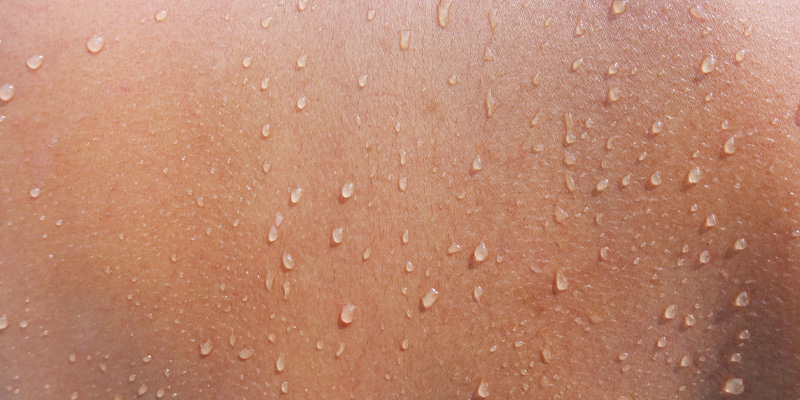 The thin layer of sweat and sebum produced at the surface of your skin, known as the acid mantle, acts like an antibacterial agent, which stops microorganisms from growing on your body. Layers deeper, fatty skin cells protect the bones and major organs.

So, how does something so thin and seemingly fragile do all that? Skin anatomy is vital in this all-important role. 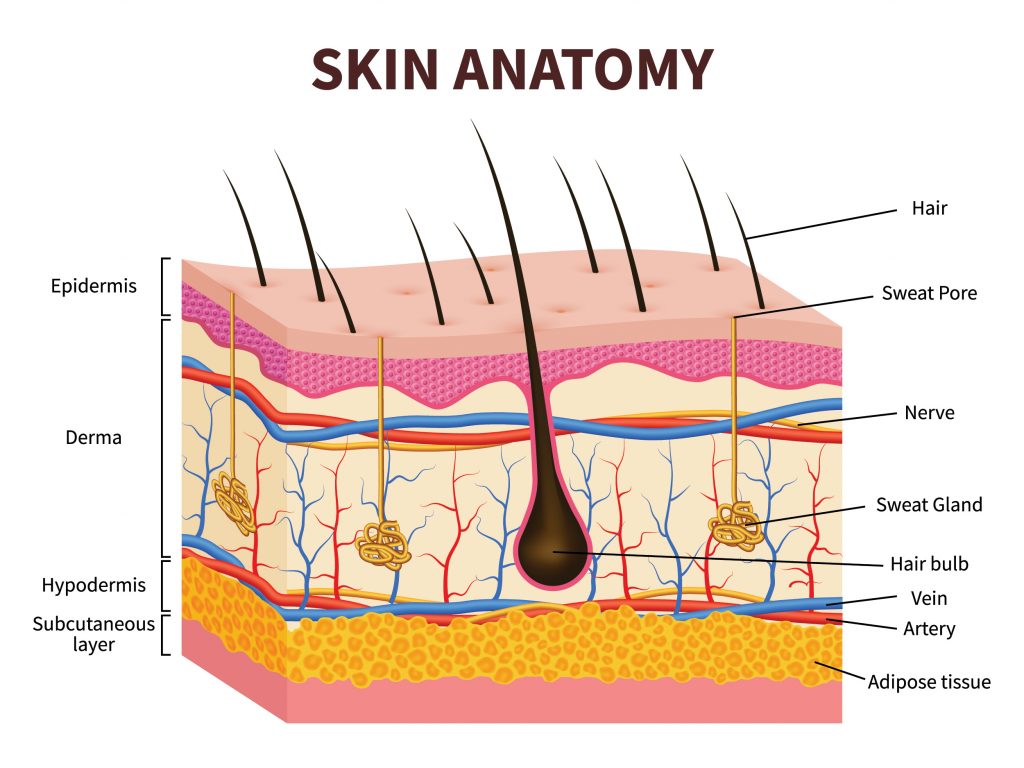 To do its job properly, your skin has got to be strong. Thankfully, it's made up of two layers – one containing the epidermis and dermis, and the subcutaneous layer.

The superficial portion of your skin anatomy is called the epidermis and is made up of layers of stratified epithelium tissue called strata.

The stratum corneum is the uppermost layer of the epidermis and is strengthened by cells hardened with keratin made in deeper strata (granulosum and spinosum). Exclusively on the palms of the hands and soles of the feet, this layer is supported and strengthened by the stratum lucidum. An interesting aside: from here, your nails grow.

Sometimes, across these top two strata, the skin anatomy visibly reacts to the environment when friction causes the formation of corns and calluses as cells are replenished from below.

At the deepest layer of the epidermis, you'll discover the foundations of what makes your skin unique – the stratum basale or basal cell layer. This layer is where the whorls, arches and loops of your fingerprints are formed. 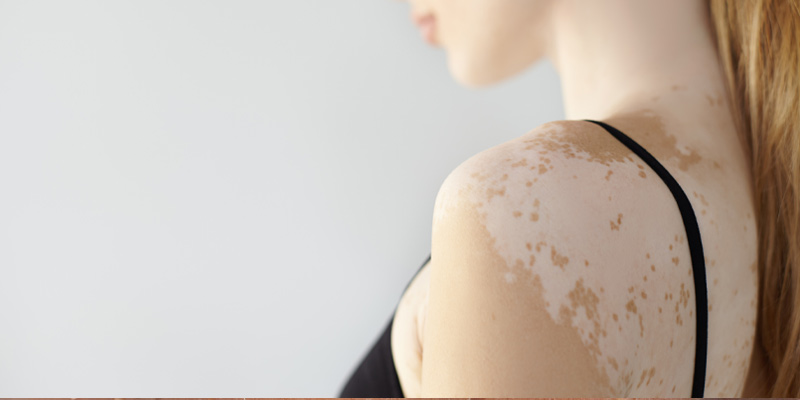 Located in the deep epidermis are melanocytes, the cells that give your skin its unique colour by reacting to UVB radiation and producing melanin.

Also contributing to skin colour, connected through wavy structures called dermal papillae, we have the mid-layer called the dermis, which can be up to 3mm thick. Home to the lymph nodes — the waste removal cells — it also provides nourishment and support to the epidermis, while its mast cells secrete histamine and its white blood cells destroy bacteria and foreign matter.

Accounting for approximately ¾ of the weight of the dermis is something you’ve probably heard of before: collagen.

This is responsible for the skin’s elasticity and resilience and is held together by protein fibres called elastin. Breakdown and damage to these are the main cause of skin ageing. 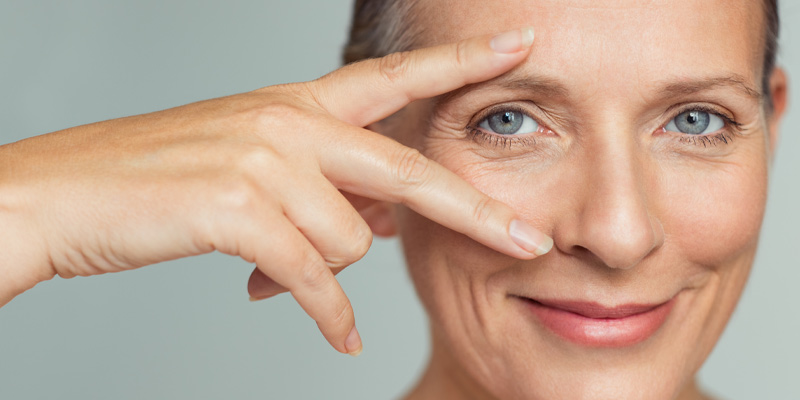 Furthermore, in the dermis lie the sensory receptors, which tell our nervous system when we are in pain. Buried deep here are also hair paila, bulbs and follicles — the source of approximately 2.5 million hairs on your body’s surface.

Ever the multi-tasker, the dermis is the site of another very important job of the skin anatomy and its mechanisms: the regulation of body temperature.

This is done through the hypothalamus, which sends a message to your sweat glands to open when you get too hot and close when you get too cold. For instance, during a workout, when your muscles contract and generate heat, sweat carries away heat as it evaporates from your skin and you’ll begin to cool down. If you need to warm up, your skin will keep in the heat from your muscles when they contract, as in the act of shivering. Erector pili muscles will also raise body hair to trap heat next to the skin. Meanwhile, your blood capillaries close to the surface of the skin anatomy can also constrict in an attempt to hold in heat at your extremities and dilate to divert heat away via the blood.

The skin anatomy is quite the showcase of bodily specialisms.

Also vital in the regulation of body temperature is the subcutaneous layer of the skin anatomy, which is full of adipose tissue.

Not only does it act as a storage system for 15% of the entire water reserves of your body, but it stores fat, too. This fat helps cushion all your internal organs as well as insulate your whole body.

It’s not a glamorous job but one layer has to do it. 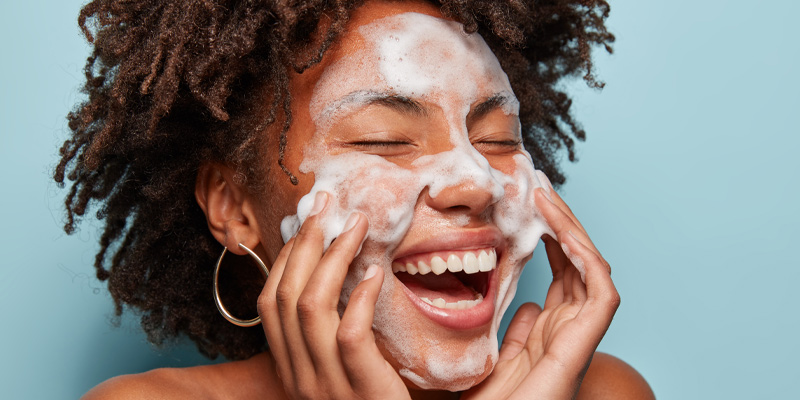 Across the clever layers of your skin anatomy, it feels only fitting that the largest organ in the body — averaging about 20 square feet in area and 25 pounds in weight — should have such a plethora of functions. But when the system goes wrong, as so many know, the suffering involved in skin conditions can be completely debilitating. Indeed, according to the American Academy of Dermatology, one in four Americans report needing medical treatment for a skin condition.

It’s little wonder we dedicate so much energy and money to protecting our skin. No doubt you’re reading this now to better understand and care for your skin. You’re not alone. By 2025, the global skincare market is estimated by Statista to be worth $189.3 billion. After all, as the house in which your entire physiology resides, it’s potentially your most valuable asset.

At the time of publishing, entering the code LEARNING in the checkout will reduce the price of our
Anatomy and Physiology Diploma Course to £29.