A Guide to Norse Gods and Goddesses

Before the beginning of time, there was Ginnungagap - a bottomless abyss, which separated the icy land of Niflheim and the fiery land of Muspelheim. These two realms rose in power and clashed; the burning frost turned into water drops and the water drops turned into life.

The first living being was Ymir, a hermaphroditic giant who was created from those life-giving drops of water and whose death was brought about by Odin and his brothers. Odin, Vili, and Vé, Ymir’s descendants, fashioned the Nordic mythological universe from his blood, bones, flesh, teeth, hair, eyelashes, brains and skull.

The Norse gods belong to two major clans: Æsir and Vanir. Odin, Frigg, Thor, Loki, Balder, Hod, Heimdall and Tyr are the most elevated representatives of Æsir and are known as the main gods. The second clan, Vanir, contains the fertility gods and count Njord, Freyr, and Freyja as their most notable members. Despite the antagonism between them, it was necessary for the two families to combine their powers and ideals for all to prosper.

At the time of publishing, entering the code LEARNING at checkout will reduce the price of our
Norse Mythology Diploma Course to £29. 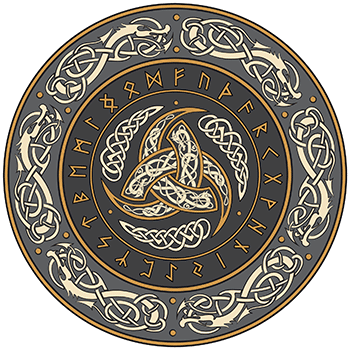 The supreme deity of Norse mythology and the greatest among the Norse gods was Odin, the Allfather of the Aesir. He was the awe-inspiring ruler of Asgard, and most revered immortal, who was on an unrelenting quest for knowledge with his two ravens, two wolves and the Valkyries. He is the god of war and, being delightfully paradoxical, the god of poetry and magic. He is famous for sacrificing one of his eyes in order to be able to see the cosmos more clearly and his thirst for wisdom saw him hang from the World Tree, Yggdrasil, for nine days and nine nights until he was blessed with the knowledge of the runic alphabet. His unyielding nature granted him the opportunity to unlock numerous mysteries of the universe.

Odin’s wife, Frigg, was a paragon of beauty, love, fertility and fate. She was the mighty queen of Asgard, a venerable Norse goddess, who was gifted with the power of divination, and yet, was surrounded by an air of secrecy. She was the only goddess allowed to sit next to her husband. Frigg was a very protective mother, so she took an oath from the elements, beasts, weapons and poisons, that they would not injure her brilliant and loving son, Balder. Her trust was betrayed by Loki, a most deceitful god.

Frigg and Odin are the parents of Balder, who was described as living between heaven and earth. Balder was the epitome of radiance, beauty, kindness and fairness. He was believed to be immortal, but he was killed with mistletoe - the golden bough that contained both his life and his death.

Loki was a mischievous god who could shape-shift and can take up animalistic forms. He conceived a scheme to cause the death of Balder. Upon learning that mistletoe was the only thing that could hurt Balder, he placed a branch into the hands of the blind god, Hod, and tricked him into throwing it at Balder, killing him.

Thor was Odin’s most widely-known son. He was the protector of humanity and the powerful god of thunder who wielded a hammer named Mjöllnir. Among the Norse gods, he was known for his bravery, strength, healing powers and righteousness.

Freya was one of the most sensual and passionate goddesses in Norse mythology. She was associated with much of the same qualities as Frigg: love, fertility and beauty. She was the sister of Freyr.

Freyr was the god of fertility and one of the most respected gods for the Vanir clan. Freyr was a symbol of prosperity and pleasant weather conditions. He was frequently portrayed with a large phallus.

Heimdall, known as the ‘shiniest’ of all gods due to him having the ‘whitest skin’, was a son of Odin who sat atop the Bifrost (the rainbow bridge that connects Asgard, the world of the Aesir tribe of gods, with Midgard, the world of humanity) and remained forever on alert; guarding Asgard against attack.

Hel was the goddess and ruler of the Norse underworld of the same name (also known as Helheim). She has pale skin and appears to be death-like. She nurtures and houses any who enter her realm.

Vidar was another son of the supreme god and Grid (a giantess), and his powers were matched only by that of Thor.

Vale was the son of Odin who avenged Balder’s death by killing Hod, the god who pierced Balder with mistletoe.

The richness of the Norse mythology and folklore continues to mesmerise people of all ages and backgrounds. Immersed in the sagas, we let our imagination go wild, as we learn of old worlds and consider new and exciting interpretations.

At the time of publishing, entering the code LEARNING at checkout will reduce the price of our
Norse Mythology Diploma Course to £29.

Centre of Excellence User
Thanks! It was very useful :)
Reply

Centre of Excellence User
That was very helpful info! I hope you post more soon! I will make sure to use this information handy in my mythology world!
Reply

Centre of Excellence User
I am writing a book based on Norse mythology and this was a huge help. I needed to know about all the Gods and Goddesses and now I do!
Reply

Thewaterboi241
it would be cool to read your book
Reply

Centre of Excellence User
i found this very helpful thank you.
Reply

Centre of Excellence User
A great summary would love to know more about the Norse clans and the families of that time.
Reply

Centre of Excellence User
The mortals who became gods through sacrifice, the era of conquest and warfare . Ancient wisdom that tarries till today even in the hearts of the woriors in Vahalla and the wise ones among men who dine with the gods, for those that dine with the gods are wiser than men. Memorable write up...
Reply

Centre of Excellence User
Recently, Saturn has had 20 recently discovered moons. They will all be named after Norse gods and goddesses. I found this rather interesting and wonder if any of the gods mentioned on this page will become the name of one of these new moons.
Reply