Our Handfasting Ceremony Was Inspired by Our Love of Ancient Magic

It is true that love can bring a little magic into our lives. This was certainly the case for two Centre of Excellence students, Elisabeth and Paul. The couple, both practising witches from Nottingham, met through a Pagan dating group in 2018 and were wed in a moving ancient magic handfasting ceremony inspired by an online course Elisabeth was studying with Centre of Excellence.

In ancient magic, marriage is as important as within other cultures and lifestyles. It is particularly special, as there is no prejudice and anyone can marry anyone unless they are related, of course. They are especially joyful occasions, just like the handfasting ceremony of Elisabeth and Paul.

“There was a ritual in the Ancient Magic Diploma Course, which gave us the basis for the handfasting,” Elisabeth said, explaining, “We added our own parts like the calling of the corners and the toast at the end.” This is a short ritual that practitioners of magic use before spiritual work that cleanses your space and asks the four directions of the Earth for protection. 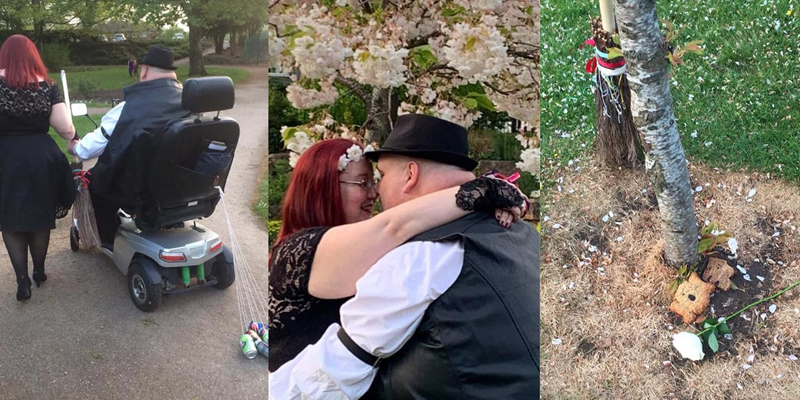 Recalling the handfasting ceremony and the special day, Elisabeth said, “We held the ceremony in our local community gardens and it was like the Goddess has blessed us. It was a beautiful, sunny day and the tree that we held the ceremony at was in full blossom, even though it was bare only the week before. Even the local wildlife came out to see us.”

A handfasting ceremony is often presided over by a High Priestess or Priest, and friends and family can join in. Likewise, family was an important part of the day for Elisabeth and Paul. Elisabeth recalls, “There was a path leading up to the tree so my eldest son walked me up the aisle to “Iris” by The Goo Goo Dolls and we invited anyone that wanted to join us. We had the ceremony, which my two daughters performed, and then handed out a small drink of mead and homemade biscuits to all who joined us.”

In a handfasting ceremony, couples are welcomed to write their own vows. Similarly, Elisabeth and Paul decorated the besom themselves and stepped over it together, as is tradition, to mark the newlyweds stepping over the threshold. 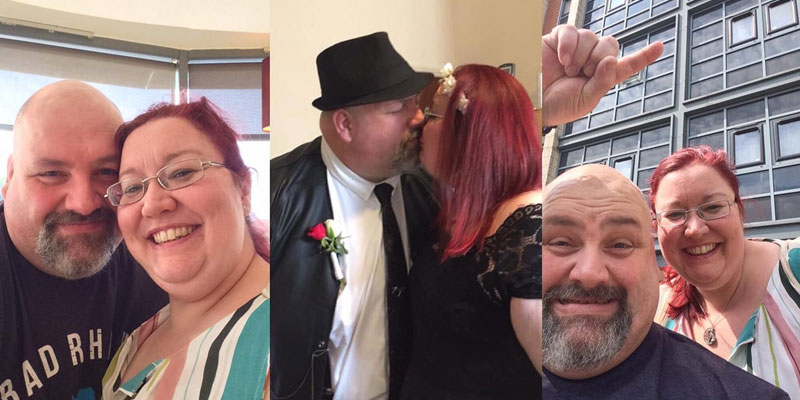 “We left an offering to the goddess of a flower from my bouquet and a biscuit made just for her,” Elisabeth said, adding that, after the handfasting ceremony, they danced their first dance to Christina Perry's “A Thousand Years”.

Of that moment, Elisabeth said, “Everyone that joined us was crying. For those that could not attend we set up a live stream and we had several comments from people watching about how much they loved it. Even non-Pagans were saying it was the best service they had ever been to as it felt intimate and personal.”

Adding that it was definitely a beautiful day, Elisabeth said she was pleased to have studied the Ancient Magic Diploma Course.

However, just like any marriage, handfasting is not to be taken lightly as the ceremony represents the joining of two people not only in this lifetime but also for eternity. Handfastings do differ from other marriage ceremonies, in that if after a year the two people no longer wish to be joined, they can be un-joined and separated to go their separate ways and are free to marry anyone else. The ribbons used to join them are cut and then burnt in a fire, as they are never to be used again.

Indeed, Elisabeth tells Centre of Excellence, “Unfortunately, we are no longer together, however, the handfasting ceremony was one of the best memories I have of our time together as it was so natural and beautiful.”

At the time of publishing, entering the code LEARNING in the checkout will reduce the price of our
Ancient Magic Diploma Course to £29.