The complex and fascinating history of crystals and crystal healing is long enough to fill tomes. Thanks to its unique place in this timeline of metaphysical healing, clear quartz is a good place to start.

The Origins of Crystals and Clear Quartz

While there is documented evidence of crystal use dating back to Samaria, Ancient Egypt and Rome, our story starts in Ancient Greece with the first use of the word “crystal”. It roughly translates to mean ‘ice’, named by the Ancient Greeks for clear quartz and its striking resemblance to perpetually frozen water. Thus, all crystals owe their designation to clear quartz itself.

The Ancient Greeks believed crystals were a gift from the gods and, in wearing them, mere mortals could connect with the higher powers. Nowadays, our understanding of crystals, their metaphysical properties, and their healing qualities stems from important figures in science, such as Nicola Tesla.

Tesla was one of many to note the capacity of crystals to carry an electrical charge called the “piezoelectric effect”. This can be observed in everyday life, whether you are interested in crystal healing or not.

Look down at your watch. It might be the product of clear quartz timepiece technology, which sees quartz embedded into watches to regulate their electronic oscillator and keep perfect time. Elsewhere, we consume soft crystals when we sprinkle salt on our meals or eat rock sweets at the seaside. 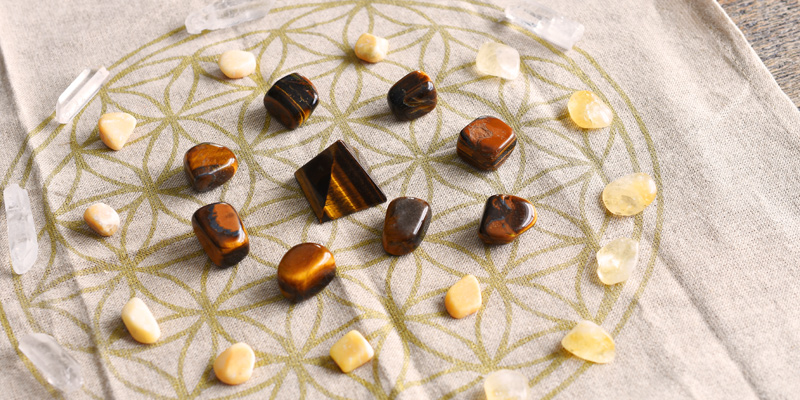 Crystal traders will tell you quartz is one of the largest crystal families, with over 60 members including citrine, amethyst and tiger’s eye, as well as rose and blue quartz. The quartz species registers a seven on the Mohs scale of mineral hardness, below diamonds, corundum and topaz. It has a trigonal structure whereby there are three axes at 60-degree angles to one another on the same plane and the fourth plane is perpendicular.

But, for so many, its properties transcend its mineral make-up.

Quartz, especially clear quartz, is generally thought of as the best all-round crystal tool for healing — so much so that it’s sometimes referred to as “The Master Healer”.

It is a strong resonator of energy and oscillates at the highest vibration of all crystals. In colour programming, the white of the quartz symbolises an open heart, while clear quartz symbolises clarity of vision and a path not yet taken. You can see why many crystal practitioners see quartz as a great starting point for your crystal healing journey. 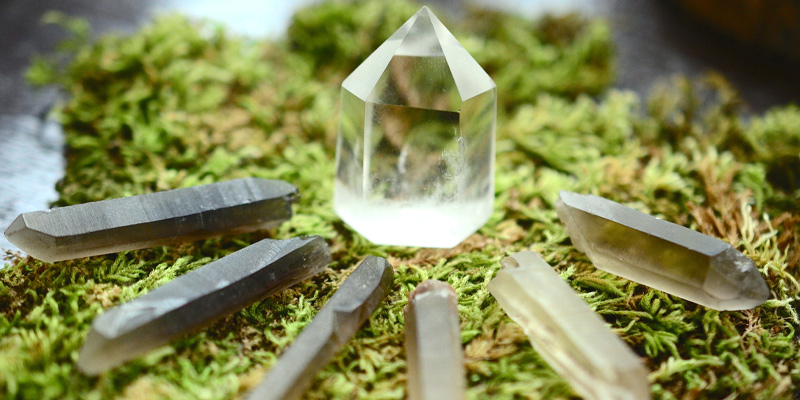 They are easy to program, are bountiful, come in many different colours for aura matching, and are favoured for their healing amplification abilities, especially when clustered in a room dedicated to your practice.

One of crystal healing practitioners’ most popular intentions for quartz is to draw away negative energy. This is why clear quartz is often placed at the foot and head of the therapy area during various modes of massage and reiki. Practitioners of other holistic therapies often like to incorporate the use of crystals into their treatments.

It can also be used to promote balance in palm readings, teacup readings, tarot and angel card readings, and astrology readings to support the reader and add power to the reading. A piece of tumbled quartz is sometimes added for further energy equilibrium.

Smokey quartz, additionally, is excellent for use in grounding and centralising, as it neutralises unwanted energy and dissipates toxic energy. 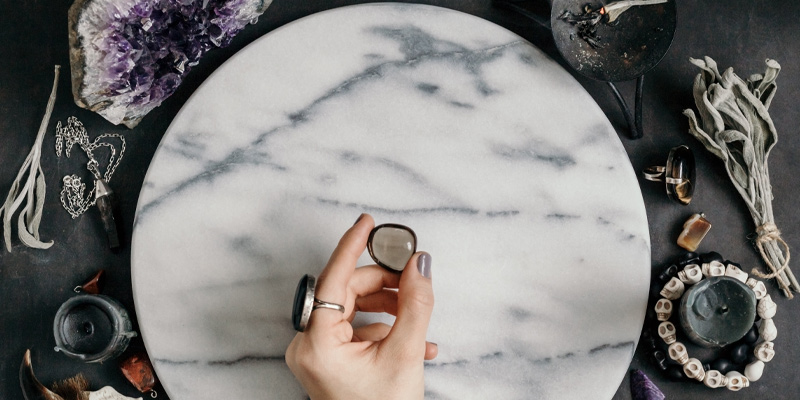 Aside from its natural form, quartz is also malleable in the right hands and can be moulded into many useful shapes for varying healing practices.

Clear quartz crystal balls are favoured by skilled readers for scrying the past, present and future whereby the spherical shape sends energy radiating throughout the space. Crystal eggs have similar strength in energy at the point of the egg.

Quartz skulls can be used to amplify thought, awareness, and consciousness-lifting. Perhaps this is why they are often found amplifying meditations when placed in a circle around the meditator or promoting clarity and focus on the third eye.

While quartz is favoured for its unique properties, it is also revered for its ability in more general use. For example, clear quartz arranged in a web pointing inwards can help to retain energy during a crystal chakra healing and balancing. Quartz can often be found during a chakra healing; rutilated or clear quartz at the crown — the ultimate evolution of the soul. 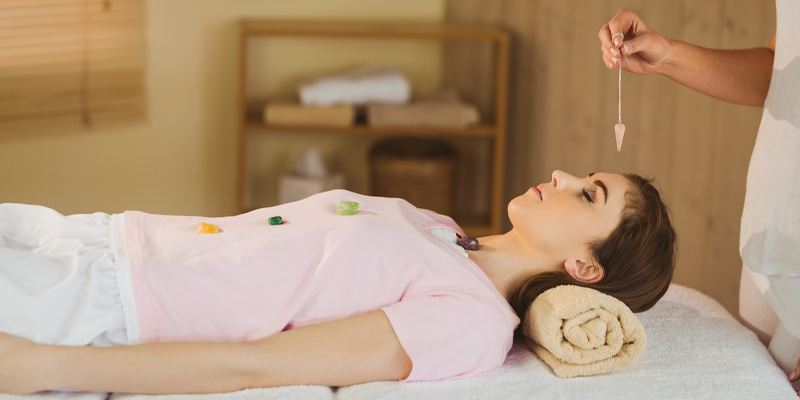 Meanwhile, rose quartz is helpful at the sacral and heart centre for love, self-love, acceptance, and calmness. Many crystal healers also use quartz to balance bodily functions, as well as those of the mind, believing they are interlinked through energy and the aura.

Here, rose quartz is often used to promote circulatory, reproductive and integumentary balancing, while clear quartz is used to alleviate complaints in the lymphatic, nervous, and immune systems, as well as in detoxification of the renal and digestive systems.

As quartz is available in so many colours, it can be used in aura cleansing to match the colour of your, or your client’s, aura. Clear quartz is a good all-rounder for aura cleansing or repairing an energy leak in a broken aura.

Due to their natural pointed shape and crystalline structure, the quartz family tends to make the perfect crystal for laser wands – used in aura rebuilding and combing. Most are made from clear quartz.

However, because of its energy-enhancing properties, quartz needs to be cleansed frequently. With all of these uses at your disposal, it’s likely your quartz crystals will get a lot of use while you explore their many purposes and imbue them with the intent that feels right. 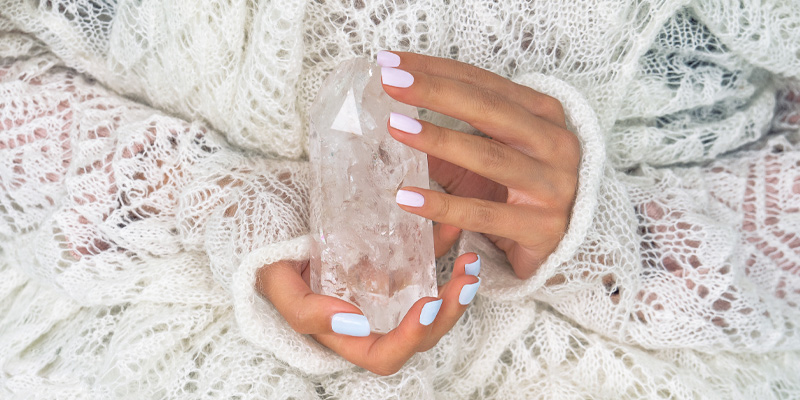 There are various methods of cleansing for quartz, from sound cleansing, soaking your crystal in saltwater overnight, to leaving it out in the sun or full moon, or burying it in dry soil for several hours.

A sage smoke cleanse would also suit quartz well. The smoke takes to the crystal and purifies its energy, thus optimising it for your next session.

Now you have some insight into the breadth of uses quartz can lend to your crystal healing practice, all that’s left is to start your collection.

Always seek ethically sourced quartz and look out for crystals that feel large, heavy and warm in your hand. If you get a tingly sensation, you’re on the right track.

Remember: There is no right or wrong way to collect crystals — you will find the right crystal for you. It is waiting for you and will ‘speak’ to you when you discover it.

From there, the intent is up to you.

At the time of publishing, entering the code LEARNING in the checkout will reduce the price of our
Crystal Healing Diploma Course to £29.